Here are 3 things you should do with your stock options 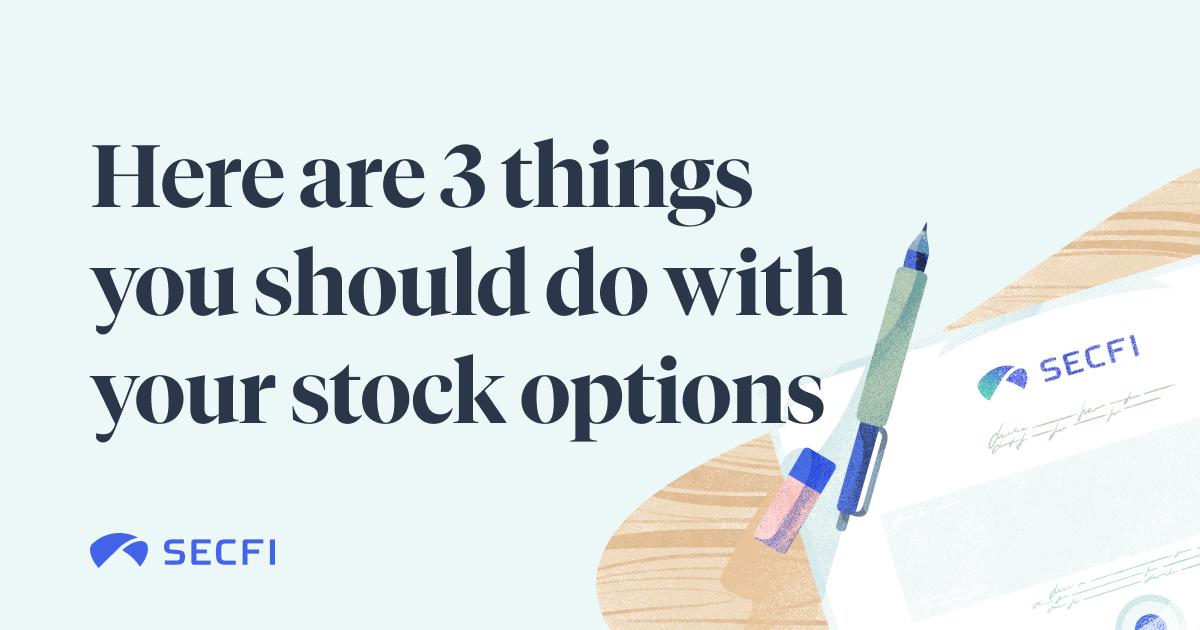 Editor’s note: This article was originally published on TechCrunch‍

There’s a reason startup compensation packages usually include equity, or stock options. For one, it’s a way for startups to remain competitive in the job market and attract top talent. But it’s also a way to reward those employees who join early and give them a tangible reason to stay incentivized to grow the company.

The problem is that while many employees do understand that their equity compensation could mean a big payday in the future — and, in 2021, that’s more likely than ever — they don’t often understand the inevitable complexities of their stock options. That puts employees at risk of not getting the most value after an IPO or, worse, losing them.

If you’ve ever been confused about your equity, or haven’t thought much about it, you’re not alone. That’s why I’m going to share three things all employees joining a startup should do with their equity:

While many startups are getting better at proactively communicating the value of your equity package upfront, some are still figuring out the best way to do it. That’s because, unlike the more straightforward number of a salary, stock options are more nuanced — they’re a living, breathing type of compensation.

The most important pieces of information to pay attention to are your 409A valuation, your strike price, the type of options you were granted, and the preferred share price.

The 409A valuation is based on your company’s valuation. This is also referred to as the fair market value (FMV). The 409A valuation can, and does, often change — they have to be updated at least once a year by a third-party valuator in order to meet tax rules. The 409A also changes during a fundraising event. Investors involved in the funding round determine how they value the company and are given options, at that valuation, in exchange for cash.

Since the company has now been valued higher, the 409A changes for everyone. It’s also possible for the 409A to go down if, for any reason, the company is now valued at a lower amount. This is known as a “down round.”

Airbnb had a notable down round during the pandemic, though it eventually recovered and went public. Your strike price is the price at which you can buy your stock options (also known as exercising). Yes, buy. You are given the option to buy them, which is why they are called stock options. But know that your strike price will likely never change. However, if you’re ever given more stock options (perhaps as a future bonus), this would be a separate grant and the strike price could be different. Companies are legally required to issue stock options at the most recent 409A price (or higher).

It’s also important to know what type of options you have. The major difference between the types of options is how they’re taxed. It’s most likely that, as a current employee, you have incentive stock options (ISOs). They’re called “incentive” because they have a more favorable tax treatment.‍

Non-qualified stock options (NSOs) are taxed less favorably. If you’re joining a startup that’s much closer to an IPO or exit, it’s possible you were granted restricted stock units (RSUs). That’s because the company is now so valuable that any strike price would be too high to be favorable for you.

Unlike ISOs or NSOs, which are options and not taxed unless you exercise, RSUs are treated like income and are taxed when they vest.

Finally, knowing the preferred share price, or pref price, can help you better understand what your options may be worth. The pref price is what investors paid per share during the latest investment round. It’s also information used when updating the 409A valuation. Therefore, knowing the most recent pref price can give you a more accurate representation of what your options could be worth than just the 409A valuation alone. Companies don’t always disclose the pref price, so you may need to ask if they will provide it.

There are other essential pieces of information, like your percentage of ownership in the company and your vesting schedule.

It’s likely that your percentage of ownership will be diluted over time as the company raises more money and issues more shares to investors, increasing the size of the “pie.” As long as the valuation increases enough each time, your slice of the pie will remain sufficient. Meaning, you’ll still come out ahead during an IPO.‍

Vesting schedules are pretty standardized by this point. Usually, you’re given a four-year vesting schedule, when all your options are vested and can be exercised, with a one-year cliff, which is when they start vesting. Sometimes early exercising is available before they’ve vested, but you’ll need to ask your company if they allow it.‍

It can get much more expensive to buy your options‍

To reiterate, the options you were given are just that: options. Meaning you have the option to buy, or exercise, them. Hopefully at a very low price (again, that’s your strike price). And, yes, taxes are involved — both when you exercise and when you sell them. But let’s focus on the exercising part first because that’s where most employees, even founders, I’ve worked with are shocked at the cost.

No matter what kind of options you exercise, you need to pay taxes on them in addition to the cost to exercise. But there are significant differences between how they’re taxed. And how much you’ll owe is determined by your strike price and 409A.

Let’s start with ISOs. Unlike your salary, which is taxed as ordinary income, ISOs trigger the alternative minimum tax. It’s likely you’ll owe less AMT than you would in income taxes. But it can still end up being a significant amount.

Plus, AMT calculations can get very complicated very quickly. And your employer does not calculate any of this for you. Instead, the IRS expects that you report this the next time you file your annual taxes.

Calculating the taxes on NSOs is much more straightforward. Unlike ISOs, they are taxed as ordinary income. You pay income tax on the spread between your strike price and the 409A when you exercise. How much you’ll pay is also determined by your tax bracket, both federally and in your state.

The federal tax bracket can be as high as 37% — and that’s in addition to your upfront cost of exercising. Your company may withhold some of these taxes for you when you exercise, but not all of them. Like ISOs, you are expected to pay the full amount the next time you file your annual taxes.

The key takeaway here is that the more valuable your company gets, the more expensive it can be to exercise. While your cost to exercise — your strike price multiplied by the number of options — doesn’t change, the amount you’ll owe in taxes does. Since taxes are determined by the 409A, if you’re at a fast-growing company, they can rise pretty quickly.

It’s also important to note that your company will not be doing most, if any, of the tax calculations for you. That’s why it’s always important to work with a tax professional to help you understand what you’ll owe and to make sure you pay it.‍

If you’re coming from another startup, do something with your options ASAP‍

If you’re joining a new startup, there’s a good chance you’re probably coming from another one. The first thing to know is that it’s most common for stock options to expire after 90 days. While some startups have been giving longer windows to exercise — up to 10 years in some cases — there can be drawbacks to taking the extra time.

The 90-day window is another common shock for many employees. The biggest mistake I see from employees is not planning ahead when they’re changing jobs: That’s when many are surprised to learn that they only have 90 days to exercise their vested options before they expire, leaving many scrambling to find the cash to do so. Too often, employees can’t find the cash and end up forfeiting their options.

Your company may offer you longer but know that, even in this instance, you still have a decision to make before 90 days. That’s because if you have ISOs, they automatically convert into NSOs after 90 days, meaning you lose your favorable tax treatment. And if your former company continues to grow, fundraise and increase in value, the cost to exercise your equity will only go up over time.

Joining a startup is exciting and can really pay off, literally. But too many employees don’t understand that navigating stock options is complicated, even for those who deeply understand the U.S. tax code. The best way you can get ahead is just by understanding how your stock options work, being prepared, and knowing what questions to ask your tax or financial professionals.