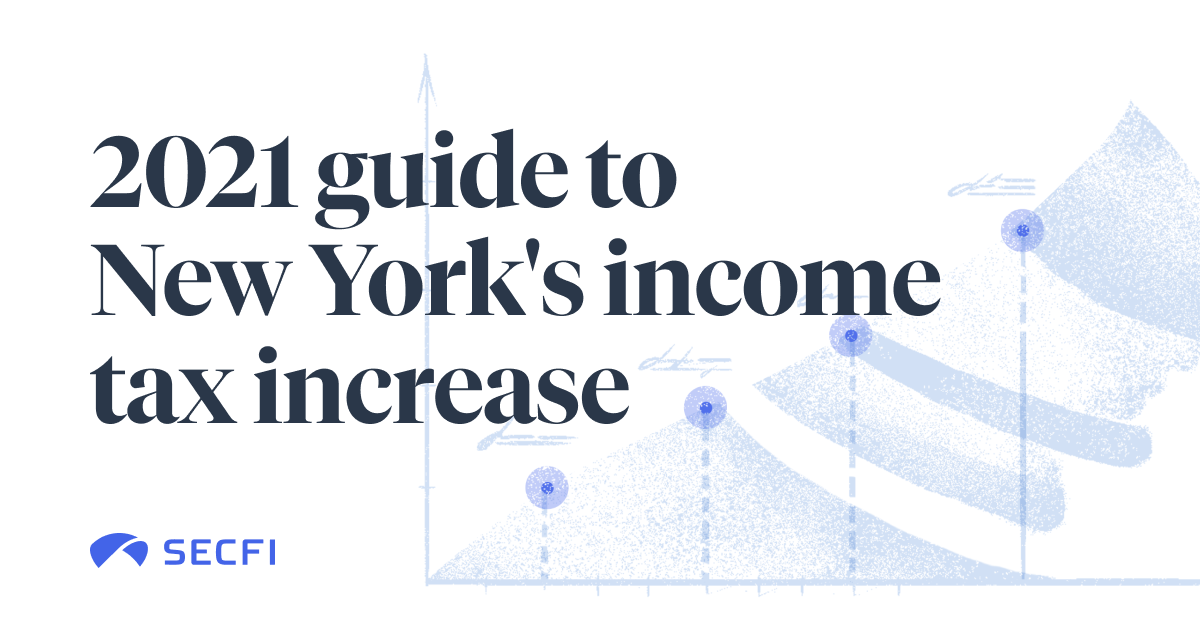 New York lawmakers recently passed tax hikes on the state’s highest earners, which could potentially carry tax implications for New Yorkers who decide to exercise their stock options in 2021.

When New York lawmakers passed the state’s $212 billion budget in April 2021, the public latched onto the most eye-popping statistic: that ultra-wealthy earners living in New York City would pay the country’s highest combined state income tax rate of 14.776%, beating out California, which taxes its millionaires 13.3%.

And while most of us won’t have to worry about falling into that 14.776% state income tax bracket (earning more than $25 million in income in a single calendar year and living in New York City), the state did make changes to its income tax laws that could potentially affect New Yorkers who decide to exercise or sell their stock options this year.

Note that 2021 New York state income taxes were reduced by a fraction of a percent for two major middle-class tax brackets that many of the state’s residents find themselves in:

One last wrinkle: The state is applying a slightly different withholding rate on wages paid between Jan. 1, 2021 and July 1, 2021.‍

What does that mean for people who hold ISOs?‍

If you live or work in New York and you’re thinking about exercising or selling incentive stock options (ISOs), the state’s new tax brackets could potentially affect how much you owe Albany at the end of the year. Here are three common situations you might find yourself in if you hold ISOs:‍

I want to buy some ISOs this year:‍

If you decide to exercise ISOs in 2021, you won’t owe New York state income taxes on that purchase, because ISOs enjoy favorable tax treatment with the IRS. However, it’s possible that buying ISOs triggers the federal Alternative Minimum Tax, or AMT. Check with your financial advisor, or check out our Exercise Tax Calculator.‍

I want to sell some ISOs that I’ve held for less than 1 year:‍

You’ve earned a profit of $40,000, which gets added as ordinary income on your state and federal taxes, alongside whatever you earn in wages, or other investment income that year. Depending on how much you earn from your short-term ISO sale, you might find yourself bumped up into a higher state income tax bracket.‍

I want to sell some ISOs that I’ve held for more than 1 year:‍

If you decide to sell ISOs that you’ve held for more than 1 year, you’ll get long-term capital gains tax benefits on your federal tax return, but no such tax benefit on your New York state income tax return — New York taxes all profits from stock sales as ordinary income, no matter how long you hold the stock.

Depending on your unique personal finances, it may make sense to hold onto your ISOs for more than a year, to take advantage of long-term capital gains on your federal income taxes.‍

What does that mean for people who hold NSOs?‍

Non-qualified stock options (NSOs) are taxed differently from ISOs by the IRS and New York state. Your employer might only offer you NSOs, or you might find that your ISOs have automatically turned into NSOs if you (a) leave your company and fail to exercise your ISOs within 90 days and (b) work for a company that allows a more-than-90-day exercise window.
‍

If you exercise or sell your NSOs in 2021, you may find that you owe income taxes to both the IRS and New York state. Here are three common situations you might find yourself in if you hold NSOs:‍

I want to buy NSOs this year:‍

One of the major differences between ISOs and NSOs is that you’ll potentially owe taxes twice on NSOs: First, when you exercise them, and again, when it’s time to sell.

For example, let’s say you want to exercise 10,000 NSOs from your employer for $1 each, for a total cost of $10,000. The fair market value of those NSOs is $5 each — either set by a private company’s 409(a) valuation, or by the stock price if it’s a publicly traded company.

As soon as you exercise those NSOs, you’ll owe income taxes on the assumed profit, in this case, $40,000. If you live in New York, this profit is taxed as ordinary income by both the IRS and New York state.‍

I want to sell NSOs that I’ve held for less than 1 year:‍

Once you exercise your NSOs, you own your company’s stock and you get to decide when to sell. Some people end up buying and selling their NSOs on the same day, using the proceeds from the sale to cover the cost of the shares, effectively treating the one-day transaction like a cash bonus.

In that case, you’ll owe the ordinary income tax rate on the profit to both the IRS and New York state.

Other people exercise their NSOs and decide to hold onto them for some time to see if they’ll appreciate in value before selling. In that case, you’ll have to pay taxes again when you sell at a later date.

If you sell NSOs less than 1 year after you exercise them, and/or less than 2 years after they were granted, the IRS and New York state will treat any profit you earn on the transaction as ordinary income, or short-term capital gains.‍

I want to sell NSOs that I’ve held for more than 1 year:‍

If you exercise NSOs and decide to hold onto them for more than 1 year before selling them, any profits you earn on that eventual sale will be taxed as long-term capital gains by the IRS. New York state treats all stock sales as ordinary income, no matter how long you hold onto the shares before selling.‍

Can exercising or selling stock bump me up into a new tax bracket?‍

One thing we occasionally hear in the wild is, “I’m on the edge of the next tax bracket, and I’m worried I’m going to lose money if I get a raise at work, or I sell some stock and it gets counted as income.”

Don’t worry, because the United States operates under a system of progressive taxation.

Looking at those two numbers, you might think you’ll owe $162,000 in state income taxes. But no! Under progressive taxation, you’ll actually owe:

Want to learn more about when and how to exercise your stock options? Feel free to reach out to chat with us, or try our Exercise Tax Calculator.