Why a Happy Money executive financed his equity with Secfi, then introduced it to the entire company 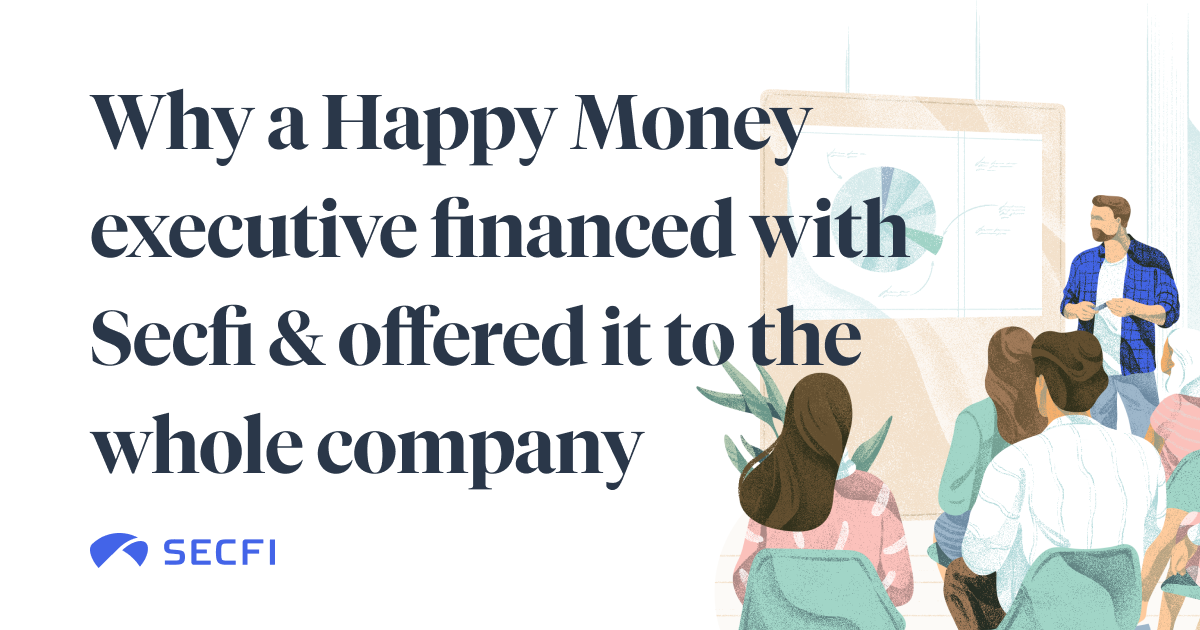 Happy Money is a fast-growing fintech that provides financial tools and services to help consumers get out of debt — or “sad” money — as they call it. As a founding member, one would assume Dan Sinner, Chief Customer Officer, would be pretty knowledgeable about equity. After all, he helped build the company and has been an instrumental part of the team that raised over $140 million, with a company valuation of over $500 million.

But when it came time to make a decision about his own stock options, Dan realized the cost was too high to pay out of pocket. He had recently gotten married and wanted to buy a house, so putting up his own cash (and a lot of it) was a non-starter. He also realized that, if figuring out what to do with his own equity was tough — as an executive who was there from the beginning — his employees were likely facing the same issues, if not more concerned about how to pony up the cash.

That’s why he turned to Secfi. Secfi’s team helped Dan understand his own personal equity situation and finance the cost of exercising his options. Dan and Happy Money leadership also partnered with Secfi to offer an education program and financing options to all employees.

“I'd rather tell employees on the day they get their offer, ‘Here's your partnership with Secfi for you to consider after your 12­-month cliff,” Dan said

What set Dan on his own equity journey was that, after nearly a decade at Happy Money, he was actually coming up against a hard deadline: his equity could expire.

“Even as an executive, we're supposed to know all the things about all the things, which is not  necessarily true,” Dan said. “Especially when it comes down to the complexity of taxes and different types of equity.”

His bigger concern was the cost. “Believe it or not, even though I'm involved in a high growth startup, I’m a relatively risk ­averse person when it comes to my personal finances,” Dan said.

He knows that concern about the cost of his options may be surprising as a tech executive. “Even if you're an executive who's been working for a long time, you still may not have enough cash to go buy your own options,” he said.

But Dan didn’t see any clear options. It was “just hang on and keep going, keep pushing through, and then figure out when I have to figure it out,” he said. “Which is definitely not the best way to do it from my perspective.” Thankfully, he found another way.‍

Secfi gave him a way to own his options, without paying out of pocket‍

His first impression was the breadth of knowledge that Vieje and the Secfi team had about equity. Especially when it came to taxes and, more specifically, how to make a plan that could reduce Dan’s cost to exercise, which would set him up for a higher return on investment when Happy Money goes public in the future..

Dan was also drawn to Secfi’s non-recourse financing because his main concern was his cost to buy his options. It gave him the cash to exercise with minimal risk. He doesn’t have to pay the cash back to Secfi until Happy Money goes public. And if, for some unlikely reason, they don’t go public, he doesn’t owe anything. Secfi takes on that risk.‍

He valued working with Secfi so much, Happy Money offered it to every employee‍

It wasn’t just that Dan found the solution he was looking for in Secfi’s non-recourse financing. It was also that Vieje and the rest of the Secfi team were so friendly and knowledgeable about equity that he knew everyone at Happy Money, from his executive team down to individual employees, could benefit.

Dan and his executive team knew that Happy Money employees may not even understand the value of their options. “I think that's the hard part for employees,” he said. “That gap between, when you start and when you actually can touch the money.” Like him, many employees just don’t put a plan together because it doesn’t feel real yet.

Dan knew that educational resources were needed, in addition to any financing option. If an employee didn’t understand the intricacies, and potentially cost, of exercising, they could miss out.

“Now there's an in ­between,” he’s happy to say. “At least something where Secfi can help them  understand how it works.” And he liked that option better than anything Happy Money could offer, like “a bunch of links to articles spread across the internet, or just saying, ‘Go hire a CPA.’”

“It’s in partnering with Secfi, who’s already done that and has curated all of that,” he added, “that we can just connect them and say, ‘Here’s a partner who we trust, and that you can go dive into your own research on it.’” It was especially key to partner with Secfi to do this, as companies are not legally allowed to provide financial advice to their employees. Instead of assuming his hands were tied — Dan tapped Secfi as a third party to provide the education to his employees that he legally could not.‍

If they want to buy their options, every Happy Money employee also now has access to Secfi’s non-recourse financing, just like Dan.

“What I found most comforting,” he said, “was that this would allow all our employees, not just the executives or senior ones, an opportunity to have the option to make a major life decision.” Especially so that they didn’t regret that “this thing I worked so hard for the last two, three, four, five years, is going to go away” for whatever reason.

At the end of the day, he’s happy knowing that all Happy Money employees now know financing is  available. As a founding team member, he said, “you want to make sure you give them all the options, whether it's Secfi or others. And obviously, we love Secfi. We chose Secfi.”

And, in choosing Secfi, he believes it also adds to the transparent culture they’ve built. He’s not concerned about employees buying their options and leaving. “The opposite of fear is love,” he said. “And I think leaders who choose to lead by fear, or be driven by fear, ultimately, won't have success.” Ultimately, that’s the culture he wants to have at Happy Money: one built on love.

This testimonial is not meant to be used as investment advice. The testimonial may not be representative of the experience of other customers and there is no guarantee of future performance or success.